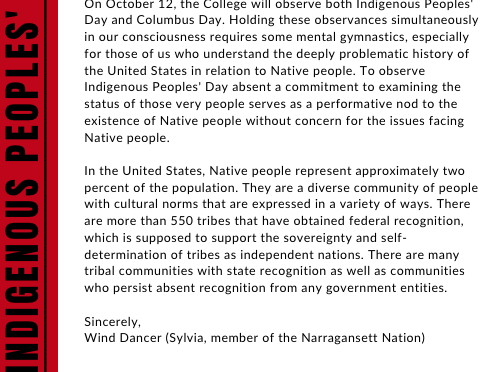 Asco wequassunnúmmis Netompaûog (Hello, My Friends, in the language of the Narragansett People)

On October 12, the College will observe both Indigenous Peoples’ Day and Columbus Day. Holding these observances simultaneously in our consciousness requires some mental gymnastics, especially for those of us who understand the deeply problematic history of the United States in relation to Native people. To observe Indigenous Peoples’ Day absent a commitment to examining the status of those very people serves as a performative nod to the existence of Native people without concern for the issues facing Native people.

In the United States, Native people represent approximately two percent of the population. They are a diverse community of people with cultural norms that are expressed in a variety of ways. There are more than 550 tribes that have obtained federal recognition, which is supposed to support the sovereignty and self-determination of tribes as independent nations. There are many tribal communities with state recognition as well as communities who persist absent recognition from any government entities.

Below Are Some Issues Affecting Native People in the United States

Health Disparities
The life expectancy for Native people in the U.S. is 5.5 years less than the national average. According to the Indian Health Services, not only do Native people die at higher rates than people of other races, but they are disproportionately affected by diabetes, liver disease, homicide, and suicide. Tribes in the U.S. are currently disproportionately affected by COVD-19.

Land Disputes and Tribal Resources
Conflicts over tribal land began before the founding of the United States and continue today. Land disputes between tribes, states, and the federal government are often motivated by private interests in the natural resources on or near tribal land. Tribal lands have been exploited for economic gain and have threatened these areas with climate change effects. Tribes have fought in federal courts to retain their sovereign land rights, to preserve sacred lands and burial grounds, and to protect the environment for the generation to come.

Violence Against Native Women (Content Warning)
Native women are subject to violence at alarming rates. According to Indian Law Resource Center, “More than 4 in 5 Native women have experienced violence, and more than 1 in 2 have experienced sexual violence.” Department of Justice data suggests that 80% of the physical abuse and sexual assaults experienced by Native women are perpetrated by non-Native people. Throughout Canada and the U.S., a disproportionate number of Native women, including two-spirit and trans women, go missing or are murdered.

Loss of Native Language
Most Native people in the U.S. speak English. According to the Indigenous Language Institute, only 175 out of more than 300 native languages remain today. Many tribes are working to retain their native language and have launched language reclamation projects to help their communities keep their languages alive. It is predicted that without action to salvage the remaining languages, about 20 will be left by 2050. The founding director of the National Museum of the American Indian said, “Language is central to cultural identity. It is the code containing the subtleties and secrets of cultural life.”

Voting Rights
Although Native people have the right to vote, they are often unable to exercise that right due to the lack of accessible polling places in their areas. Additionally, many Native people on reservations are unable to register to vote because reservations don’t always use standard street addresses, which leads to their voting applications being rejected. Absent voting abilities, the interests of Native communities go unaddressed.

How You Can Support Native Communities