Each January, cities and towns, business and corporations, schools and universities mark the birthday of Martin Luther King Jr. In celebration, we dust off our fragmented memories and pieced-together understandings of King’s life and legacy. Some communities hold church services that conclude with arms linked and slightly off-key renditions of “We Shall Overcome.” In some places, we step out of our daily routine to do community service, demonstrating our commitment to a “day on and not a day off.” And in other places, we come together to discuss society’s most pressing problems against the backdrop of King’s soaring speeches and compelling narratives – “I have a dream that one day…. A threat to justice anywhere is a threat to justice everywhere…. Darkness cannot stamp out darkness only light can do that….”

Once during the year, we lift King up, resurrecting him from our collective consciousness. In doing so, we also resurrect our better selves, our yearnings for justice, and our dreams of freedom. We make King kind and generous, patient and conciliatory, and a champion for inclusion in its most sanitized forms.

We choose to forget the King who shut down White clergy who opposed him with the power of his pen in a letter he wrote while in Birmingham Jail, the King who out of frustration exclaimed “Why We Can’t Wait,” and the King who called out “The Three Evils of Society” at the National Conference on New Politics in 1967. This speech is considered one of King’s most revolutionary speeches but we hear little of it.

“We are now experiencing the coming to the surface of a triple prong sickness that has been lurking within our body politic from its very beginning. That is the sickness of racism, excessive materialism and militarism.”

Some contemporary writers consider King’s speech, “The Three Evils of Society,” a prophetic commentary on the state of the United States today. They are connecting King’s observations about excessive materialism to the present day weaponization of poverty, his remarks about racism to colonialism and the extractivist nature of our society, and his commentary on militarism to border imperialism that is taking place at our southernmost border and all over the world. For me, King’s work is relevant today not because of his poetic calls for us to be better human beings but because of his deep and searing analysis of what prevents us from being better human beings and a better nation. The problem is that we are acculturated to the supremacy of some and the oppression of others, the flow of capitalism instead of the flow of compassion, and our most base urgings toward violence instead of our inner callings toward peace.

Instead of relegating King to a single page in a history book or to a celebration once per year, we need to consider what King’s “radical revolution of values” would look like. What might happen if we all became “maladjusted to injustice”?

After thirteen years of dedicated service, Suzanne Hinton, Director of Academic Engagement, is leaving Emerson. In addition to her time as a member of the affiliated faculty at Emerson, Suzanne provided support and guidance to generations of Emerson Alternative Spring Break students, worked hand-in hand with numerous faculty across departments to develop service learning opportunities, and partnered with community-based organizations in the Boston area. She also played a critical role in the College obtaining Carnegie Classification as a civically engaged institution.

Suzanne has been an integral member of the Social Justice Center – bringing care, professionalism, and compassion to all aspects of her work and every interaction. Suzanne has served as our in-house photographer, the lone caretaker of the many plants on the Walker 10, and the person who reminds us it’s time to tidy things up in the kitchen, to which we all immediately respond. She will be greatly missed for her kindness and support of all of us.

A few days ago, I asked Suzanne if she had any preference for what I might say about her time at Emerson in this announcement. She replied, “Well, you could say that I gave it the old college try…I learned a lot from some hilarious mistakes…and I became a much better listener.” This represents the essence of who Suzanne is; she is self-effacing, puts others before herself, and has an incredible work ethic. I am so honored to have had the opportunity to work with Suzanne during her time at Emerson. We wish Suzanne peace and abundant joy in all of her future endeavors, and look forward to seeing her walking her dog, Muffin Top, in JP.

STAY TUNED FOR EXCITING NEWS FROM THE SOCIAL JUSTICE CENTER!

Many of you are aware of the Department of Education’s proposed changes to Title IX regulations. These regulations, if implemented as currently proposed, would likely reduce reporting of incidents, increase exposure to trauma for people reporting, create an imbalance of support based on access to resources, and significantly alter Emerson’s handling of reports of power-based interpersonal violence. The proposed changes would require hearings in which parties are cross-examined by advisors. This shift has the potential to put Emerson staff members in offices beyond Title IX Access & Equity who are currently involved in the Title IX process into conflicting roles as process administrators, advisors, and supervisors. For more information about Emerson’s Sexual Misconduct process and the proposed changes, please see www.emerson.edu/policy/sexual-misconduct and KnowYourIX.org. I extend thanks and appreciation to members of the Emerson community who submitted comments to the Department of Education.

This flux in the landscape of Title IX on a national level has had an impact on our ability to fill the Deputy Title IX Coordinator/Investigator position. The search remains open and we continue to review applications for appropriate qualifications. Reports of violations of the College’s Sexual Misconduct Policy continue to be processed and investigated by a talented group of highly skilled external investigators. We will keep the community informed on our progress with this search.

“We are all wounded at times…many of us remain wounded in the place where we would know love.”  bell hooks

During the Fall 2018 semester, the Social Justice Center received 18 reports of bias-related incidents. The vast majority of reports occurred in Emerson classrooms and involved bias based on gender identity and expression, and ethnicity and culture. Although reporting is down this semester from last fall, there was an increase in anonymous reporting this semester. Follow-up on non-anonymous reports may include the provision of support to the person(s) affected, education for individual(s) engaging in bias, or other actions.

If you have been impacted by bias and would like to connect to someone in the Social Justice Center and/or report your experience, you can do so by submitting a report at www.emerson.edu/bias with the option of remaining anonymous, emailing bias@emerson.edu, or calling (617) 824-8528. 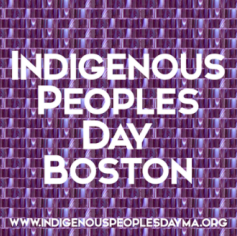 A Call from Native People

Native people have been calling for an end to the observance of Columbus Day for decades. This call is not just about changing the name of the holiday. It is an act that recognizes the genocide of millions of Indigenous people, the theft of lands that began with the arrival of Columbus, and the historic and current wrongs committed against the Indigenous people and their sovereignty.

Samantha M. Ivery has joined the Social Justice Center as Director of Diversity & Equity Initiatives. Samantha brings depth of experience in advancing anti-oppression and social justice efforts. As a former Assistant Dean in the Office of Pluralism and Leadership at Dartmouth College as well as Director of the Center for Women and Gender, Samantha’s programs, development activities, workshops, and engagement with students and student groups were informed by critical social theories including Black Feminist Thought and Critical Race Theory.
Most recently, as Director of Projects for Campus Equity &

Inclusion at Bennington College, Samantha developed the strategic foundation for the college’s new equity and inclusion initiative. She also designed and co-facilitated anti-oppression dialogue groups for faculty and staff, partnered with the Library staff to curate social justice online materials, and served as a resource to the Bennington Community around diversity and equity issues.

Over the past several months we have been questioning what it means to truly engage in social justice work. What is it that we are striving for? What is our urgency? Can we collectively envision the world we are working toward?

We have come to more deeply know that anti-oppression work is insufficient. It is not enough. While we mitigate the harms caused by oppressive structures and practices, and seek to disrupt our own internalized oppression, we must also call for liberation. This understanding has led us to ponder what it means to truly be free.

Right now:
We ask, are you free? Are you really free? At locations throughout campus you will find black boxes. Grab a card, write your thoughts, and insert the card into one of the black boxes. Keep an eye out for interactive installations on Walker 10, in the Iwasaki Library Co-lab, and in Paramount.

We hope you will grapple with us about what it means to decolonize, reclaim, imagine, and manifest a future of co-liberation.

In reflection, we have considered whether our office names and titles align with our deepening values. This is especially important as we think about the incredible work that Melanie Matson and Greta Spoering do in support of our community, especially those who are impacted by power-based interpersonal violence. We seek to lift up and recognize the power of authentic relationships, the importance of trauma-informed practices, and the incredible strength of individuals and communities, as well as their extraordinary capacity to heal. In support of our community the Office of Violence Prevention & Response has become the Healing & Advocacy Collective—a space for being believed, a space where you can be yourself, and a space for healing.

And finally, many of you are aware that I was hired six years ago as Vice President for Diversity and Inclusion. In keeping with our shift in focus to social justice, President Pelton has changed my title to Vice President for Equity and Social Justice. I take on this title with full recognition of the weight of the work ahead and hope you will join the Social Justice Center in manifesting a future of co-liberation.

Dear Members of the Emerson Community,

Over the past several weeks, the Social Justice Center has been working with representatives of EAGLE (Emerson’s Alliance for Gays, Lesbians, and Everyone) and Emerson’s Facilities Office to increase the availability of gender inclusive restrooms on campus. In the fall of 2016, Emerson designated 12 multi-stall restrooms on campus as fully inclusive restrooms, meaning any person of any gender may use them. Eight additional multi-stall restrooms in high student traffic areas in Ansin and Walker will now be available. These restrooms are located in the following locations:

For members of our community who prefer not to use multi-stall gender inclusive restrooms, there are approximately 100 other restrooms on campus, more than half of which are gender segregated with the remainder being single user facilities.

I wish extend my thanks and appreciation to EAGLE for their continued collaboration as well as their thought-provoking Trans Day of Visibility Awareness Campaign.

As a reminder, gender inclusion is not just about restrooms. For more information about gender diversity, gender inclusion, use of pronouns, name changes, community resources, and restroom locations, please visit our Transgender, Genderqueer, and Gender Nonconforming Inclusion website.